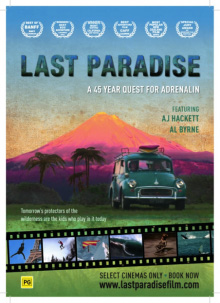 A special screening of the National Geographic version of LAST PARADISE will be held at Surf World on Friday the 21st Nov with Film Maker and physicist Clive Neeson on hand to present and explain the significance of the film. Local legend Al Byrne is one of the story tellers in the film who creates the spirit of innovation and love of the wilderness. For those who missed the LAST PARADISE at Twin Towns event, this is an ideal opportunity to see the film and be inspired by  its wider significance.

“LAST PARADISE” has been dubbed “the greatest story of adrenaline and innovation” and tells how a bunch of young  adventurers met in the wilderness and pushed the limits of innovation to pioneer the modern concept of extreme sports and adventure travel. For physicist/film maker Clive Neeson, the film has literally been a lifetime in the making and that journey has revealed major issues about our future and how we will innovate the vital solutions for survival of our civilisation. Oddly enough, it’s all concealed in the fun of adventure and 45 years of jaw-dropping original footage.

Among the characters are our extreme sports pioneers and surf legends like AJ Hackett and Al Byrne who take us on the journey of a lifetime to discover virgin paradise in Noosa, Gold Coast, Bali, Mexico, Europe, New Zealand and Africa during the 60’s and 70’s.

Entry is $10 per head. Drinks available to purchase.