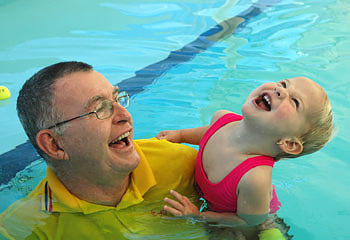 Emma Lawrence: The swim school first opened over 40 years ago in 1966 in Northern Queensland. Laurie’s passion for swimming first came about when he was working as a Physical Education teacher. Laurie’s father owned the lease on the Tobruk pool in North Queensland, where several great Olympic athletes such as Dawn Fraser trained. It was there that Laurie’s passion for swimming grew rapidly, and he became immersed with teaching people how to swim.

Surf World: I believe the Laurie Lawrence Swim School has produced a fair few swim stars over the years as well?

Emma Lawrence: You’re right, the swim school has produced a large number of State, National, Commonwealth, World and Olympic champions. It’s due to this reason that swimming coaches from around the world come to Australia to learn the techniques that LLSS have developed from over 35 years experience.

Surf World: Laurie was also involved in the Kids Alive do the five program. Can you tell me a bit about it?

Emma Lawrence: Laurie has been an avid advocate for water safety, introducing the ‘Kids Alive do the Five’ water safety programs in 1988. Drowning is the greatest cause of accidental death in children under five in Australia.  The Kids Alive community service program educates the public on five important steps to reduce the risk of preschool drowning.

Surf World: Laurie has done so much for swimming in Australia, it’s quite remarkable. Now where can people learn to swim at Laurie Lawrence Swim Schools?

Emma Lawrence: Laurie Lawrence Swim Schools have several venues on the coast including Currumbin, Banora, and Underwood. They have swimming classes that cater from babies as young as 4 months old, to children and adults learning to swim, as well as advanced adult squad classes. For any information regarding Laurie Lawrence Swim Schools, please feel free to contact their following pools:

Surf World: Terrific. Well thanks for your time and on behalf of everyone at Surf World we’d like to thank you for being a major sponsor of Surf World’s 2014/2015 Calendar!

Emma: Glad we could help! Thanks