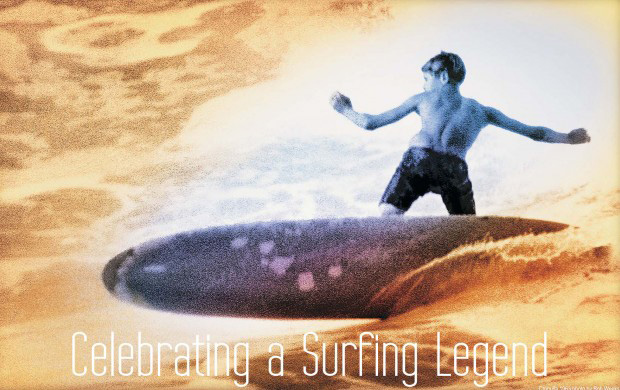 Timed to coincide with the Kirra Surf Stock Festival, the exhibition celebrated the life of a surfing enigma and his significant contribution to the classic sixties era of surfing.

Brown was ranked alongside Midget Farrelly, Nat Young and Peter Drouyn as one of the best surfers of the 1960s.

He was only 17 years of age when he qualified for the final of the first World Surfing titles in 1964 won by Midget Farrelly at Manly Beach.

His short but impressive surfing life featured in movies like Bob Evans’ 1963 “Young Wave Hunters” and Paul Witzig’s 1967 groundbreaking movie “Hot Generation”, both of which will feature in the exhibition.

Following Brown’s tragic death in 1967, an annual memorial competition was held in his honour at Cronulla from 1968-1970.

Midget Farrelly won in 1968, Frank Latta won in 1969, and in 1970 a 16-year-old rookie from the Gold Coast, Andrew McKinnon, won the third and final event at Wanda Beach.

Now a well known Gold Coast beach and surf reporter, McKinnon has put together this exhibition that will feature timeless surfing photos of Brown and others from the 1960s, archival movie footage, surfboards, clothing, surf magazines and newspaper clippings.

The exhibition will also feature the impressive Perpetual Trophy, modeled on Jack Eden’s classic photo of Brown’s famous “soul arch” bottom turn at Sandon Point, which is a priceless piece of surfing art that has been McKinnon’s prize possession since 1970.

“Even though I never had the chance to meet Bobby, I’ve treasured the memorial trophy for the last 40 years,” said McKinnon.

“So to celebrate that occasion and the legend of Bobby Brown, I decided to pay homage to his surfing genius by putting together a significant exhibition.”

McKinnon and former world champion Wayne “Rabbit” Bartholomew will be the special hosts for the official opening night of the exhibition on November 11 from 6.30pm.

The night is open to the public with tickets available at the door (Tomewin Street, Currumbin) or by phoning (07) 5525 6380. Tickets are $15 which includes a sausage sizzle and drink as well as a tour of the museum.
Tweet
Stephanie Gilmore Exhibition on Display
SURF WORLD A WINNER AT THE GALLERY AND MUSEUM ACHI...