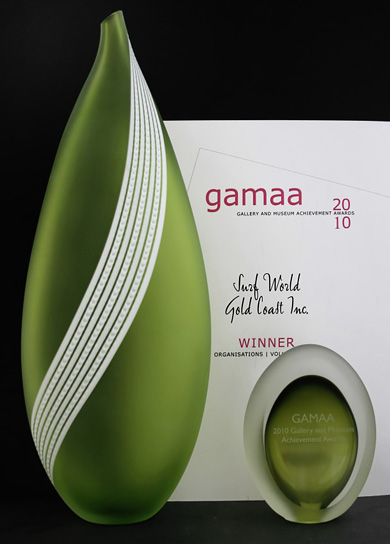 Surf World Gold Coast was announced the winner of the best volunteer run organisation at the Queensland Gallery and Museum Achievement Awards on the 15 October 2010.

Chairman Mal Sutherland and Daryl Barnett, two of the driving forces behind the establishment of Surf World Gold Coast, were on hand to receive the award.

“I believe the award is recognition for all the many wonderful volunteers who ensure that the doors of Surf World open each day,” said Sutherland

“Running a museum is a huge task and we have a team of over 50 people who do everything from vacuuming the floors to maintaining the website.

“It’s also a credit to our major supporters Gold Coast City Council, Connecting Southern Gold Coast and Currumbin Wildlife Sanctuary who have been instrumental in the establishment and success of Surf World.”


Surf World Gold Coast is a museum dedicated to celebrating the history and culture of surfing. It is located at Currumbin (opposite the wildlife sanctuary) and hosts an impressive array of surfing memorabilia including surfboards, photos, books and clothing.
Since its opening in 2009, Surf World Gold Coast has hosted many significant events and exhibitions including the highly successful Divas of Surfing event in 2009 and the Art of Surfing in 2010.

Its latest exhibition, celebrating the life of 1960s surfing legend Bobby Brown, will commence on 11 November 2010.
Members of the public and school groups are welcome to visit Surf World each day between 9.00am and 5.00pm.
Anyone interested in becoming a volunteer should visit the museum or phone direct on (07) 5525 6380.
Tweet
New Exhibition to Celebrate a Surfing Legend
The Divas of Surfing – Kathy “Gidget” Kohner Zucke...