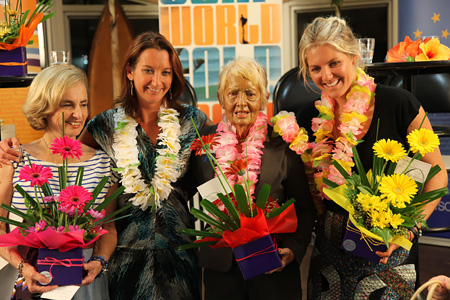 Kathy Kohner Zuckerman was the original Gidget surfer girl and was once named the seventh most influential surfer in history. Her fictionalised life on the beach at Malibu was the subject of the classic 1957 book “Gidget” and the first ever Hollywood surf movie. Subsequent Gidget movies, musicals and TV series heralded the rise of surfing into popular culture.

Born in Sydney, Phyllis O’Donell began surfing at age 23 and was the surprise winner of the first ever World Surfing Championships in 1964. For her efforts, she was rewarded with $250, a surfboard and numerous packets of cigarettes. Nevertheless, at a time when the sport was dominated by men, Phyllis was a trailblazer for future generations of female surfers.

Since becoming a professional surfer at the age of 16, Layne Beachley has achieved a record-breaking career. Layne has won a record seven world titles, including an amazing six titles in a row from 1998-2003. She has also appeared in numerous surf movies, and since 2006 has staged the richest event on the women’s surfing tour at Sydney’s Manly Beach.

The first rookie to win an ASP world title in 2007, Stephanie Gilmore has become the dominant force in women’s surfing. She has won the last three world championships and is probably the most recognisable female surfer in the world today.

“Women’s surfing often does not get the recognition it deserves and the Divas exhibition and Divas evening focusses attention on some fantastic female surfing achievers,” said Surf Word Gold Coast Chairman Mal Sutherland.

The Divas exhibition features a rare collection of trophies, photos, rash shirts and surfboards. Additionally, profiles of all 13 Australian women who have been world champions since Phyllis O’Donell in 1964 are included (full list appended to this release).

The Divas of Surfing evening featured addresses from all four surfing divas as well as canapés and refreshments.

“This is a really historic event that brings together two pioneers of women’s surfing with two current legends of the sport,” said Sutherland. “It should provide a real insight into the past and future of women’s surfing.”

Some of the displays from the night are still at the museum so come down to have an in-depth look at the history of these amazing women in surfing.
Tweet
SURF WORLD A WINNER AT THE GALLERY AND MUSEUM ACHI...